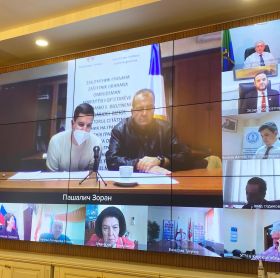 The Protector of Citizens, Zoran Pašalić, MSc, took part on Tuesday, 17 November 2020, in the fourth international conference organized by the High Commissioner for Human Rights in the Russian Federation entitled “"Human Rights Protection in Eurasia: Exchange of Best Practices among Ombudspersons".

Within the panel "Lessons Learnt From The Pandemic: New Realities Of The Meaning Of Human Rights", the Protector of Citizens, among other things, pointed out that we were witnessing a global pandemic of a virus that affected not only our daily lives, but also the course of economic, political and all other trends, and that the Ombudsman institution was needed more than ever before.

The ombudsmen are tasked with not allowing measures to protect the population from infectious diseases such as COVID-19 to result in gross violations of citizens' rights, and that it is necessary to assess the proportionality of these measures in relation to citizens' rights, Pašalić has pointed out. He emphasized to the participants of the panel that in such extraordinary circumstances within which the Constitution of the Republic of Serbia allows necessary derogations from human and minority rights, the Protector of Citizens, as an independent state body for human rights protection, intensified monitoring and extended its work to 24/7 regime so that the citizens of the Republic of Serbia could exercise their rights even in emergencies.

Mr. Zoran Pašalić said that the operation of the Protector of Citizens during the state of emergency had been based on preventive-advisory activities, mediation between the complainant and administrative bodies, issuing initiatives to amend regulations to the competent authorities, investigations of control on field and acting upon citizens' complaints.

When making national level decisions, it is necessary to involve children in this process in order to hear their voice on issues concerning their rights; it was settled at the two-day annual conference of the European Network of Ombudspersons for Children (ENOC), attended by the Deputy Protector of Citizens for Child Rights Ms. Jelena Stojanović.

At the online conference, Ms. Stojanović highlighted the importance of informing children and young people about all issues related to the exercise of rights and the protection of child best interests, as well as scaling up the opportunities for their opinions to be heard when making decisions that affect them.

Various impacts on child rights, above all the current pandemic, were the topics of the online conference, held on 16 and 17 November 2020, attended by the representatives of more than 30 European countries.
The ENOC conference discussed the impact of decisions made at the national level in the field of child rights, child rights amid the current epidemic, LGBTIQ + child rights, as well as the implementation of the United Nations Convention on the Rights of the Child, before decision-making and subsequent evaluation.

Members of ENYA (European Network of Young Advisors) presented their recommendations for better realization of children's rights in the current conditions, while ENOC members especially emphasized the importance of participation and involvement of all children in decision-making, as well as the importance of their participation in such processes.

Conference participants agreed that it was necessary to raise awareness of children, as well as adults, about the rights of children through various activities.

In the past few months, attacks on journalists, especially female journalists, have not abated. Moreover, insults and mockery of journalists are even more frequent and more brutal, warning of growing intolerance, as well as the inability to establish a basic dialogue in a society, the Protector of Citizens Mr. Zoran Pašalić warns.

In yesterday's show "Hit tweet" on TV Pink, singer Mr. Aca Lukas kept insulting TV N1 journalist Ms. Žaklina Tatalović in the most primitive way, without being sharply warned by the show host that his words were impermissible and inappropriate for television appearance. In an attempt to be witty and funny, he vulgarly ridiculed Ms. Žaklina Tatalović and thus exhibited in practice a demonstration exercise of verbal violence, aware that he would not bear the consequences for such behavior; neither him, nor the author and host of the show "Hit Tweet", nor TV Pink broadcaster because in the already contaminated public speech, misogyny is taken for granted, so much so that we seldom publicly condemn the insults and threats that are directed at women, Mr. Pašalić states.

Through a series of meetings with representatives of media associations, the Protector of Citizens, following the example of the Council of Europe platform, initiated and established in Serbia a unique media platform for registering all attacks on journalists, as well as the reaction of competent state bodies. Verbal violence against female journalists has so far been at the very top of all attacks and this is the reason for it to continue being a special segment in the work of the media platform. The media platform will unequivocally make it known that these activities are impermissible and punishable in our society through registering the attacks, condemning them publically and imposing an appropriate sanction, Mr. Pašalić points out.

The Protector of Citizens urges state authorities and institutions to continuously provide conditions for the work of male and female journalists at their workplaces in every place and on every occasion. By consistently responding to all phenomena of violence and aggressive behavior, the state bodies and institutions, just like participants in the public space will contribute to calming anxiety and tensions in society.

In an investigation to control the work of competent institutions initiated following a protest by the parents of children suffering from spinal muscular atrophy over an alleged delay with the only medicine’s application, the Protector of Citizens ascertained that the medicine was not registered in Serbia, but that its clinical trial was approved and studies were initiated including only patients who met the conditions in the subjects recruitment phase.

After learning from the media that children with spinal muscular atrophy have been waiting for the medicine "Risdiplam" for six months, which is also the only therapy that these children can receive, and that their condition has been worsening in the meantime, the Protector of Citizens initiated an own-initiative investigation to control work regularity and legality of the Child and Adolescent Neurology and Psychiatry Clinic, Republic Health Insurance Fund as well as the Medicines and Medical Devices Agency of Serbia.

The Protector of Citizens has ascertained that a request for the issuance of a license for the registration of a medicinal product of the mentioned brand name has not been submitted to the Medicines and Medical Devices Agency of Serbia until 02 November 2020, nor has a request been filed for the import of a medicine for which a permit in Serbia was not issued.

The Agency’s statement reads that they will be able to decide on the medicine in the event when an authorized legal entity or a representative office of a foreign manufacturer submits an application to the Agency for issuing licenses for the medicine and when the authorized importer, pursuant to the Health Institution’s recommendation, files a request for the import of an unregistered medicine through public acquisitions or donations, i.e. humanitarian aid.

The Agency adds that clinical trials for the mentioned medicine have been approved and studies have been launched, involving only those patients who met the conditions in the phase of recruiting the examinees, as well as that are no obstacles for the studies to continue.

According to the documentation submitted to the Protector of Citizens, only those subjects who meet the conditions for inclusion can be included in the clinical trial, which means that this type is not an optional availability for all the patients who would be interested in starting medicine therapy.